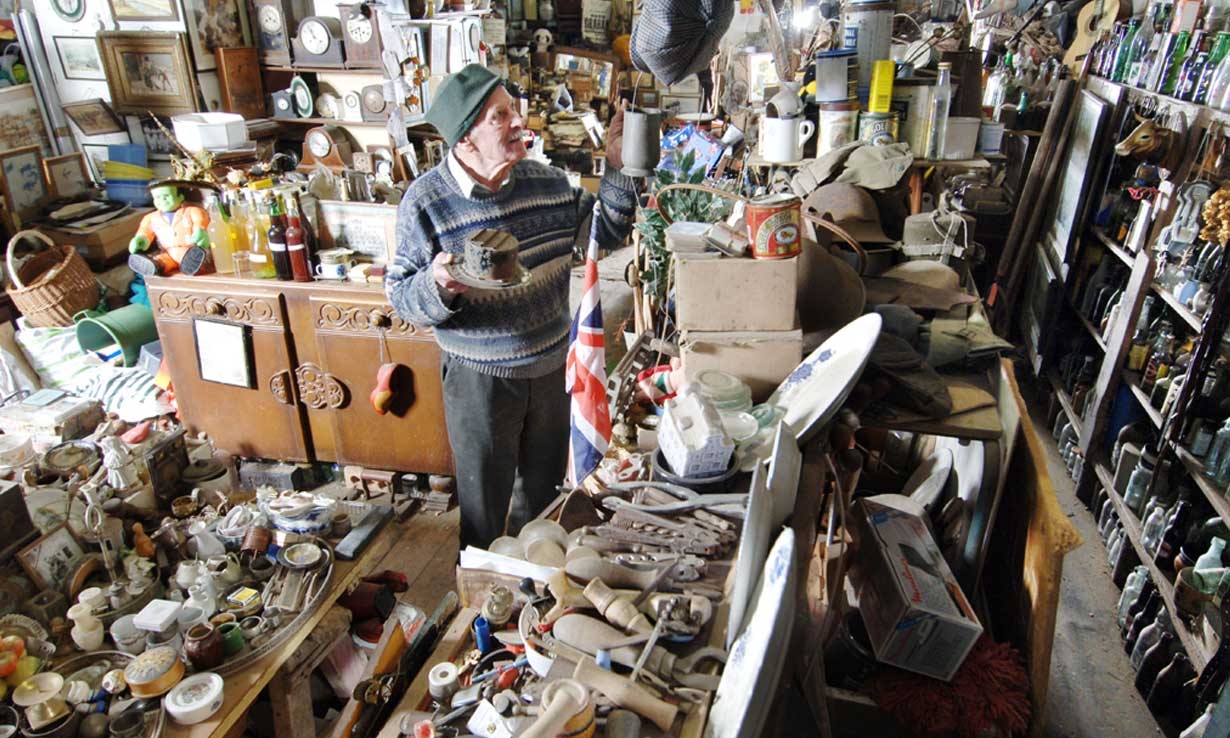 In counselling and psychotherapy as in many other walks of life, one can never be sure what problem or issue our next new client will bring through the door.  In this hectic paced life with it’s stress and pressure, anxiety is often the fundamental subject of concern for clients, although this may be cloaked or concealed, masquerading as something else.  So before us we have the overt and obvious and then we have the concealed and stealthy, each intertwined with each other like garden ivy.  Attempting to unravel this, we may ask which happened first, which in itself is reminiscent of the chicken and egg dilemma.

Filling one’s house, garden and garage with things, known as `Hoarding` seems to me to fit exactly into this possibly over simplistic picture of anxiety leading to hoarding or hoarding leading to anxiety.  Our understanding of this distressing situation has been greatly helped in recent years by excellent TV programmes such Channel 4’s `The Hoarder Next Door` where we see renowned psychotherapist Stelios Kiosses working with people who have surrounded themselves with possessions and who cannot bring themselves to part with them.   In almost every case, as the therapy unfolds, the client is found to have suffered some form of trauma or loss in their life and the therapist can often attribute the start of their hoarding behavior to this unhappy time in their lives.  So we see the client feeling a need to surround themselves with possessions which gives them comfort and a sense of security in their vulnerable state.  The problem of course is that the amount of possessions gets out of hand and affects the functionality of their house.  However, despite the difficulties that their hoarding creates, the client finds it extremely hard to let go of their things because doing so would cause more trauma through the loss and separation.

In severe cases we see people with so many possessions that they are unable to use rooms in their house for the purposes that they were intended.  For example people that are unable to reach their bed and so they sleep in a chair amongst their hoard or they cannot use their kitchen or bathroom because of the clutter.   It’s not unusual for the person’s hoard to have little or no monetary value but none the less the person will have an ultra strong attachment to it and will become extremely upset if someone tries to clear it.  Therefore it’s easy to see why treating Hoarding Disorders can be quite difficult.  This is partly because very often Hoarders don’t view their habit as an issue and have little appreciation of the effect it’s having on their lives.  Those who do realise they have a problem may not ask for assistance because they feel ashamed or embarrassed.

Is there a difference between hoarding and collecting?

The simple answer is yes and the difference is how they are organised.  Lots of people collect items such as coins, matchboxes, beer mats or thimbles but these are usually easily accessible and well organised.  There might be albums, shelving or those shallow plastic organisers with partitions and compartments involved and may have a value.  However a hoarder may collect random stuff like old newspapers, magazines, plastic containers, leaflets or cardboard boxes in a non structured way i.e. piled on top of kitchen work tops, on settees and chairs, in the bathroom and in the stairs, impairing the use of these places.

The thinking and logic of a hoarder will almost certainly hinder their ability to get rid of things and this will show itself in excuses and reasons why they need to keep their hoard.  Broken electrical items will someday be repaired, out of date food is still ok, old newspapers might contain something interesting, eighty-seven ice cream containers are useful for putting stuff in, the supermarket trolley in the garden could be converted to a go-cart for the grandchildren, the bank statements from 1957 might be required by HMRC and those leaflets about pizza and curry houses might be needed one day.

Treatment is often in the form of Cognitive Behavioural Therapy (CBT).  Here the therapist helps the person to understand why they find it so difficult to throw things away and why the clutter has amassed. This will be in conjunction with hands-on tasks and strategies to work with.

The following case studies are real but have been generalised and disguised to protect the identity of the clients, who have all given their permission for their story to be anonymously outlined here.

A symbol of another age

Attachment features strongly with hoarding issues but also filters down into the need or compulsion of keeping of items which maybe do not suit the style or period of one’s house or are simply disliked, solely because they came from an emotionally significant person.  One such circumstance comes to mind when a middle aged man had to clear the house of his late mother.  Much of the ladies possessions were worn out or broken but she did have a rather beautiful oriental teapot which the son placed in pride of place on his own welsh dresser.

The man’s wife agreed it was a fine example of a teapot but felt it didn’t fit into the style of their house and suggested that it should be put into a sale of fine art and china.  The man resisted, pointing out that it belonged to his mother and what a lovely thing it was.  To call it an argument is too strong but whatever it was, it went on for some months until the very last time the man repeated his plea  `But it was my mother’s`.   At that point the wife having had her fill of his reasoning exploded with `But your Mother wasn’t a ******* teapot.

Later in therapy we found out that there was of course more to it than the ******* teapot.  The piece came from a gentler time when tea was expensive and tea making was a sophisticated ritual.  The item itself had originally belonged to the man’s Grandmother and had been brought back from Hong Kong by another of her daughters, who was married to a shipping executive based there.  It was the days of Ocean going steamers, deck chairs on the sundeck, white linen suits and cigarettes in stylish holders, in fact a vignette of pre-war refinement.

It became likely as our work together progressed, that our man unconsciously sought to hang on to those genteel, sophisticated days that his family had once been a part of and really had little to do with the teapot itself.

An example of someone surrounding themselves with possessions in the aftermath of trauma again comes from my own client work.  My client’s son went abroad to live and left his father with his car to look after.  The car had a certain smell to it – tobacco and that single guy sort of aroma of aftershave and body spray.  When it became apparent that the son had made a new life for himself and he would not be returning, pressure mounted on the father to sell his son’s car.  He dragged his feet over this, annoying his wife greatly because they had little room for it on the driveway.  The father would start it every week and sit in it – feeling that he was looking after it for the son.  He felt it was a link to the boy and he enjoyed thinking about the places he had been taken in it. However, the longer it stayed there, the more the car developed into a constant reminder of the loss the father felt.  He was unable to move on and accept the new situation, instead he insisted on protecting the vehicle from those who threatened it and his associated memories.

A man approaching retirement booked a counselling session and explained that he had become almost addicted to attending Toy and Train Fairs, where he spent copious amounts of money on older Dinky die-cast toys and Hornby locomotives and rolling stock.   Such was his obsession that when he got home, he would leave the items in his car over the following week and smuggle them past his wife in dribs and drabs.

In this case we cannot call the man a hoarder because his collection was organised and tidy, however there was something more to it.  In therapy it emerged that the man got a warm fuzzy feeling when he bought something he liked and it was more about this feeling than the actual toy or model itself.  It’s very likely that this warm fuzzy feeling he talked about was caused by the release of Dopamine in the brain and this pleasurable feeling is very addictive.  In further sessions it came out that he had had a rather impoverished childhood and he was never able to have the things that many other children had.  As an adult he had become successful and quite wealthy and decided that he would have everything that he had missed out on as a child and so he surrounded himself with lovely things.

As therapy continued he felt strong enough to tell his wife of his past actions and to also miss the odd toy fair or show.  He stopped smuggling items into the house and eventually bought less and less.  In the end it was enough to know that he could have more if he wanted it but really his collection was now complete.

Losing a loved one

Another situation where attachment shows itself is in the period following a bereavement.  The transition stages from the shock and numbness of the initial loss to the acceptance of the new situation is well documented and is indicative of the progress the bereaved is making.  However, some people get stuck and this can show itself in the refusal to dispose of the decease`s belongings, partially clothes.  From the outside, one can see that there is no logic to this practice as the person has died and will not be returning; however for some the need to keep the clothes is overwhelming.

Despite much preparation, the task of disposing of a loved one’s clothes is probably never going to be easy and for some people it may rank as one of the most stressful experiences of their life.  For many, it may take months to feel strong enough to start the task but for Hoarders, it may never happen without professional help.  Somewhere in the distressed state of mind of the bereaved is probably guilt at what needs to happen and maybe a sense of responsibility as custodian of the deceased person’s things.  These possessions are obviously a link and may well still carry their scent.

So, it’s clear that Hoarding is often a symptom of an underlying issue such as loss, attachment or trauma.  In such cases the root cause must be addressed before working on the resulting problem.  Here at somersetcounselling.org we use the analogy of the flat tyre – we look, find and repair the puncture before we attempt to inflate it again.

More in this category: « Royal Speaks Out On Mental Health Issues Understanding And Managing Emotional Baggage »